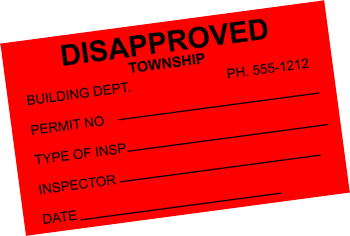 Building Inspectors are generally and mostly great people and deserve a ton of respect for their jobs. Their function is to make sure that building projects result in safe and accessible environments according to the International Code Council and state code with their amendments. Unfortunately, you may encounter a rogue inspector from time to time. This article is designed to help you navigate through the difficulties. This article also assumes that you have done your part in satisfying the national and local standards.

Your goal is to get that “green/approved” sticker as soon as you can. Time delays cost money and energy. So, gain an understanding of the situation and try to learn what is happening. Reasons for disapproval may not be evident. Some of these reasons may involve a non malicious ignorance or a nefarious political agenda.

There are ways to deal with each that do not demand high tempers. These will be discussed below. Working through to a quick resolution is in your interest as a contractor. So, “keep your head” in all situations!

Be Informed and Have that Information Ready

When an inspector provides information on a “disapproval,” that information must conform to published codes and regulations. Rogue inspectors sometimes rely on their own whims. The onus is on the inspector, not you, to provide the information as to what code is broken. An inspector cannot simply say “bad work.”

So, rather than expecting the inspector to have the code book ready. This is how you work to confound a rogue inspector and work toward getting that fast approval:

This may sound a bit excessive. However, if you are informed and have the documentation ready, an inspector may be ready with an approval.

Develop a Good Working Relationship with Your Material Supplier

Sometimes inspectors need a bit more convincing. Your material supplier will most likely be willing to help (over the phone or in person). Having “another voice” confirm the approved nature of your work often helps.

Know Your Local and State Resources

Chances are, a rogue inspector may persist; especially the politically-motivated ones. Find out who pays the inspector. Is he an employee of the State, township, city or a subcontracted inspection service. Try contacting them and explain the situation.

If it comes down to it, contact the State. States regulate the inspectors.

Illustration 1:  Unbeknown to the insulation contractor, the general contractor had a bad homeowner. The homeowner prided himself in his engineering degree and position in one of the Big Three automotive companies. Things were bad. The homeowner would demand changes and the builder cowered to every change without charging. So… enter the insulation contractor. The job called for fiberglass batts to be installed in the walls and the ceiling. The fiberglass was installed and inspections were to be called for the next day.

After the fiberglass was placed, the homeowner did research on the internet and believed that wall spray cellulose was a superior product and method. The homeowner demanded the builder change it (and without cost to the homeowner). The inspector arrived at the jobsite and colluded with the builder. The inspector failed the insulation on the basis “not installed properly.” There were no notations as to what building code/s was violated. The fiberglass was installed properly. The insulation contractor took pictures.

So, did the fiberglass contractor have any options? Sure. The lien still needed to be placed. However, the contractor, with pictures “in hand” went to the township offices and asked for clarification. The inspector could not cite a code that was violated. Instead, the inspector threw his hands up and went back to his office. The supervisor of the township would not intervene. So, what was the contractor to do? Contact the State and report the rogue inspector.

Unfortunately, in this scenario, there is nothing that can be done when politics/collusion occur. An insulation contractor needs to protect his interests in the project by enacting the lien, then move on.

Things learned by this contractor:

In March of 2014, one of our customers had his wall spray job disapproved because he refused to put polyurethane over the walls. So, how did this contractor respond?

Should You Rent or Buy an Insulation Machine?

Canada: Using a Broker to Receive Your Insulation Machines

Stop! Why in the world would you click that link?!